October saw major change in the music ministry at St. Mark. Longtime organist Hildred Tornberg stepped down from her position as organist at St. Mark. Hildred will still direct the choir.

St, Mark is pleased to announce that member Clayton Heuer has assumed the position of organist. Clayton is the son of Don and Carolyn Heuer, members of St. Mark.

His principle teachers were:

St. Mark members have heard Clayton not only play the organ but have also heard him play the violin at many St. Mark services. Clayton is a professional violin maker. 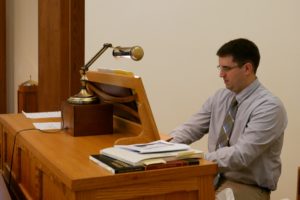 We are truly blessed at St. Mark  to have Clayton’s musical gifts help us Praise the Lord at. St. Mark

below is the audio of Clayton’s first postlude as organist at St. Mark